I wish restaurants would adopt rational policies on corkage (as I argued in my previous blog). Alas, rationality in wine policy has not reached France, where I am spending July. I had a particularly bad experience at the Bistro of the Hotel de Beaune. Since Beaune is the center of the wine trade in Burgundy, you might expect some sympathy towards people who want to drink special bottles of wine for one reason or another. While there are some restaurants with a good attitude, the Hotel de Beaune is particularly hostile.

One of my visits on the Côte de Beaune was to Albert Grivault, where after a tasting of Meursault and its premier crus, M. Bardet opened an old bottle to illustrate its aging potential. “If Meursault had a Grand Cru, it would be the Clos des Perrières,” he said, as he opened a bottle of the 1985 from his monopole. It was splendid: mature but not too tertiary, with a faint trace of minerality. (What a counterpoise to the problems of aging whites in the Age of Premox!) After the tasting, he very kindly gave us the bottle to finish off with dinner.

We were staying at the Hotel de Beaune, which I have regarded as my watering hole in Beaune more or less ever since it opened, and we eat at the bistro once or twice on every visit. We always order a bottle from the list, but this time I took the Clos des Perrières along and asked if as a favor we could drink it with our meal. The waiter went off to ask his boss, who went off to ask the owner, and then came back to say “Pas Possible.” I explained that this was an unusual situation, and that we had to drink the bottle that evening because it had been opened and would not keep, I offered to buy a bottle from the list but drink the Clos des Perrières instead, but “Pas Possible.” 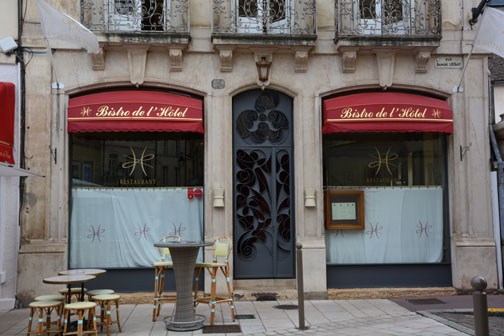 The bistro at the Hotel de Beaune where the attitude has become “pas possible”.

So we took our bottle and went round the corner to L’Ecrit Vin, where the reception could not have been more different. “You have a special bottle, we have special glasses,” said the owner cheerfully, producing some Riedel Burgundy glasses. The staff all showed interest in the wine, which was magnificent: I had been concerned that over some hours since opening it might have become too tertiary, but it went the other way, with its innate minerality really coming to the fore. It seemed younger six hours after opening than in the initial tasting.

I recognize that restaurants can establish whatever policy they like with regards to corkage (and obviously they don’t want people to bring cheap bottles they bought in the town), but as I pointed out in my previous blog, an inflexible policy seems economically against their own interests. The Bistro of the Hotel de Beaune was not full that evening, so all their policy accomplished was the loss of two covers. In case it seems that my description of the Hotel as hostile seems exaggerated, I can only describe our departure. I had not met the owner of the Hotel de Beaune, Johan Björklund, on our previous visits, but he made a point of coming to speak to us when we checked out of the hotel: “I hope you never come back,” he said. Indeed we will not.

For people who believe that enjoying a meal requires a fine bottle of wine to match the food, dining out is becoming problematic. When I started eating out, markups on wines in restaurants usually brought the wine to about double the retail price. (Yes, I realize that makes me sound like Methuselah.) At that level, I certainly felt free to experiment and to try new wines that might interest me. In fact, I often made discoveries from restaurant lists.

With markups now usually bringing wine to three or even four times retail, this is a completely different game. Couple this with sharp increases in retail prices from classic wine regions, and this means that it becomes more or less prohibitive to order Bordeaux or Burgundy from a restaurant list.

Enter corkage. While once it was all but impossible to find restaurants that would let you bring your own wine, this has now become much easier in London and New York, to the point at which there are enough choices that I feel able simply  to avoid restaurants that do not have a corkage policy. It’s especially noticeable that new restaurants, for whom the cost of establishing a good wine list is significant, seem more reasonable about corkage than longer established restaurants.

Offering the sommelier a taste when you take a wine to restaurant sometimes leads to an interesting discussion. I was enormously impressed by one restaurant in London which not only has a reasonable corkage policy, but where the sommelier reacted to my bottle of Cabernet Sauvignon from Provence by saying, “I like your wine, it is very interesting, and I will investigate getting some for our list.”

It is noticeable (perhaps counter intuitively) that it’s the restaurants that have an interest in wine, and which really try to have interesting wine lists, that are more receptive to corkage than those who simply buy their list from a distributor and regard it as no more than a profit center. Whatever the quality of the list, I think the restaurant is acting against its own economic interests by refusing to allow corkage. Unless the food is basically sold at break-even, and all the profits come from selling wine, what purpose does it serve in effect to tell winelovers to go somewhere else. Unless the restaurant is always full, all that has been accomplished is to keep a table empty.

A rationale way to handle corkage would be to charge the average profit on a bottle of wine. That way it would make no difference to the restaurant whether you brought a bottle and paid corkage or bought from the list. Another would be simply to charge the cost of the cheapest wine on the list (and the restaurant comes out ahead because they get to keep the bottle). Is it too much to ask that restaurateurs should realize it’s a win-win situation to have a corkage policy that is financially neutral for their bottom line?

I have a test for attentive wine service in a restaurant. I stretch out my hand to pick up the bottle from the table or from an ice bucket close by, but before I can grasp it, the sommelier is there. (You might argue that we should never get to the stage at which I feel the need to refill the glass, of course, but sometimes it might not be immediately obvious.) If the sommelier arrives after I have poured the wine and says reproachfully, allow me, as he puts the bottle back, he has failed the test.

I agree with Frank Prial, who wrote some wonderful articles in the New York Times years ago, arguing that he felt proprietary towards a bottle he had ordered in a restaurant and would prefer to be allowed to pour his own—my particular beef is when too much wine is poured; my companion, the Anima Figure, does not like to drink too much, but I find it embarrassing to continually stop sommeliers from over filling her glass—but I view having complete control of the bottle as a lost cause. (Frank Prial said, “The days of wine rituals are coming to an end. And as Ko-Ko says in ‘The Mikado’: ‘And they’ll none of ’em be missed; they’ll none of ’em be missed’,” but I think he was overly optimistic.)

The situation is usually more easily controlled with red wine, which is most often left on the table, than with white, when the ice bucket is not necessarily within reach. But whether the wine is red or white, I believe that if a sommelier is going to put the bottle somewhere out of my reach, he has created an obligation absolutely to be there the moment my glass is empty. Alas this does not always happen.

At one famous restaurant not a million miles from Mâcon, I had two contradictory experiences of brilliant wine service and falling down on the job. I ordered a bottle of Leflaive’s Puligny Montrachet, Clavoillons premier cru. The sommelier came back to say they had run out—but offered the Les Pucelles premier cru from the same vintage at the same price. This was an extremely handsome offer as the price of Pucelles on the list was double that of Clavoillons. This is really harking back to old values, I thought, these days they would more often come back and say, sorry, you’ll have to choose something else. But then during the dinner, my glass ran out, without a sommelier in sight. Against the protestations of my companion, I walked over to the ice bucket a few feet away, collected the bottle and poured us both wine, and then returned the bottle. No one noticed, even when I repeated the performance a little while later.

It’s an affectation to put the bottle where the customer can’t reach it. An equal affectation is not to put any salt on the table. Since individual tastes for salt vary so widely, it is impossible to predict who will or will not want it. Just as with wine, if the salt isn’t within reach, the restaurant has created a burden for itself, but I can’t count how often a hot course has been put on the table, lovingly described by the waiter to the point of listing all the ingredients—but then the moment you actually come to taste it, all the waiters have disappeared, and where is the salt? I feel like the King and the Dairymaid: “All I want is a little bit of butter with my bread.”

So make up your minds, restaurateurs. Either  make sure the wine is always in reach and put salt on the table, or train your staff to be absolutely sure that someone is watching every table every single second.