I was at a wine dinner last night which served three first growths from 1989 all from Imperial. The Margaux was surprisingly earthy, the Latour was the standout–it may become ethereal if we live long enough to see it–but the Mouton was variable. I tried three glasses: the first was definitely corked, the second was on the edge, and the third seemed fine at first, but showed signs of cork taint an hour later. A normal enough experience, you might say, especially since 1989 was a period when cork taint was perhaps at its peak–but I believe all three glasses came from the same Imperial (equivalent to 8 bottles). Bottle variation is common enough, but how can there be variation within a bottle? 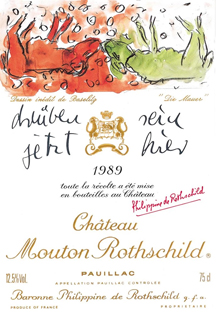 This set me wondering about the diffusion of TCA from the cork into the wine. I’ve never regarded a corked bottle as being anything other than simply corked, by which I mean that the wine is spoiled, and that’s the end of it. But if the bottle is large enough, is it possible that the top has a greater concentration of TCA, and that the contaminant might not have diffused to the bottom? The idea is rather at odds with the usual analogy used to explain the power of cork taint: a couple of teaspoonfuls is enough to contaminate a swimming pool. It’s never been suggested that the deep end would be less affected than the shallow end.

Certainly I’ve never been able to detect cork taint by sniffing the cork, which I assume is the purpose of the exercise when it’s presented to you at a restaurant, even when it’s obvious in the wine: I suppose it needs to be dissolved in the liquid to be effective. But suppose a bottle has been lying down ever since release, with some TCA in the cork. It’s going to diffuse into the wine, and the nature of diffusion is that its concentration will be greatest nearest the source, that is, the cork. If the bottle is very large, perhaps the difference might be great enough to detect in the glass. (How much time is needed for diffusion: would such an effect be more marked when the wine is young?) On the other hand, the moment the wine is poured, the liquid will be stirred up, and the TCA should become generally distributed. (And moving the bottle around would certainly have a homogenizing effect.)

So I’m mystified. It’s difficult to see how there could be significant variation in cork taint between one end of the bottle and the other, but the fact is that three glasses were all different. Logic or no logic, as a precaution I think in future I will try to have my pours from the bottom of the Imperial rather than the top.