“I really believe terroir survives distillation, but you have to work for it,” says Guillaume Drouin, at Calvados producer Christian Drouin. Guillaume’s grandfather made Calvados as a hobby, his father started producing commercially—“his intention was to make the best Calvados he could”—and Guillaume has taken the company further into artisanal production, concentrating on vintage Calvados as well as a range of blends with differing ages. Drouin was the perfect producer to visit to investigate the effects of terroir on spirits.

I have always been sceptical about the role of terroir on Cognac. The official definition of an appellation hierarchy decreasing in concentric circle around the town of Cognac is, of course, a geological nonsense, and I’ve always been puzzled how terroir can exert an effect when the starting point for production is to make a wine that is as neutral as possible. I thought Calvados might be different, as coming from apples, via an intermediate stage of cider, it offers more opportunity to show differences  that might survive or even be magnified during distillation. And Pays d’Auge comes only from apples, whereas Calvados AOP and Domfront, another appellation, farther west) can include pears as well.

Drouin is located at the northern edge of the Pays d’Auge, the best appellation within Calvados (AOP Calvados can come from a wine range of areas with outcrops as far as Cherbourg and Neufchatel). In fact, you might regard Drouin as a cool climate Calvados, as the 30 ha of orchards are near Honfleur. Two parallels with vines are the location and ages of the trees. Some orchards are 10 km farther south and harvest is later there. And they get better as they age,  “Apple trees last up to 60 years, and flavors get deeper in old trees,” says Guillaume, although it seems that the effects are not so pronounced as with Vieilles Vignes. 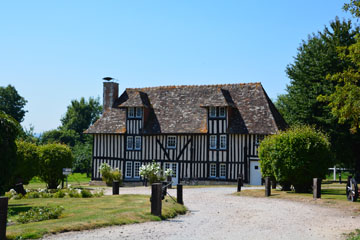 There are probably a couple of hundred varieties of apples in the region. “Every producer will tell you he has more than 20 varieties,” says Guillaume, “we work with 30. It’s important in our style. We categorize the types of apples as sweet, bitter sweet, bitter, and acid.” Because there are so many varieties, picking lasts from the end of September to early December. Apple trees function on a two year cycle, so if a variety gives high yields one year, it compensates with low yields the next year. Blending is the crucial tool for ironing out these differences from year to year. “Every time I have tried to make single variety cider or Calvados, I was very disappointed,” Guillaume says.

The blending process has many parallels with aged tawny Port. A blended Calvados has an average age, rather than an exact age. At Drouin, VSOP is 6-8 years, XO is 10-12 years, and Hors d’Age is 15 years (the legal minimum average for Hors d’Age is 6 years). Some producers make a range comparable to the ages of tawny ports—at Domaine Dupont, I tasted 20-year and 30-year Calvados, and the increase in refinement going from the younger to the older was very similar to my experience with tawny Ports. In the same way, blending may involve many lots, including very small amounts of very old spirits as well as larger amounts of younger ones. “Up to 40 lots might be blended, but the exact number is a secret,” I was told when I asked for details.

As the objective of blending is to maintain consistency of style, this does not seem fruitful grounds for investigating terroir, but Drouin also makes vintage Calvados. Most producers make vintage Calvados occasionally—when the year is good and when market demand supports it—but Drouin is really committed. “We are a specialist in vintage and make one every year,” Guillaume explains. “We bottle it after 30 years aging. Probably 70% of character is due to the aging, and 30% is the quality of the vintage. We find differences from one vintage to the next, but not as much as you would find in a wine region.”

Issues of balancing acidity and tannins are similar to wine. Lots that are unusually well balanced are not blended but are kept aside to become vintage Calvados. While blended Calvados is aged in French oak, for the vintage other sources may be used, depending on the year. “Calvados is traditionally blended, it’s the way to get balance. With vintage we change the source of the casks each year to get balance. The blend is made by the same production method each year, it has to have the same style, but for the vintage every year is aged in a different way.” So the 1993 shows a light, delicate style—it was my favorite in a vertical tasting—and it was aged in casks from Sauternes. The 1995 is much denser and was aged in old Port casks. When I commented that it seemed more classic, I was given the 1973—“this is really classic”—which was aged in Calvados casks.

So this makes it a little difficult to assess the effect of vintage. The differences are sufficiently striking, however, that it seems fair to conclude that, much like wine, they reflect what happened to the various cultivars in the specific conditions of that year, perhaps even amplified by the choices made during aging. Vintages are a bit easier to compare with Calvados, of course, because there is no aging in the bottle: once the Calvados has been imprisoned in the bottle, the signature of that vintage has been captured for once and for all.

There are really too many variables for it to be possible to compare terroirs. I’m not aware of individual producers making different bottlings from different orchards; comparing different producers would be complicated by different blending choices; and with vintage the main point is to emphasize the success of the year. But I am quite convinced that vintage Calvados offers something of the same interest as comparing vintages with wine, and certainly allows for choices in matching style to palate.

1 thought on “Does Terroir Survive Distillation?”