The Roccas have owned land in Barbaresco since 1834, but today’s winery is a story of the last three generations. The winery is a modest-looking group of buildings off the road about a kilometer from Barbaresco, in the Rabajà Cru. Built around a courtyard and larger than is apparent, there’s a splendid terrace behind the buildings with a view right across the vineyards. Standing on the terrace, you feel the microclimate of Rabajà in the wind that is channeled across the vineyard by two hills. Underneath the buildings, the modern cellar is in three storeys, built into the hillside in 2008 to allow wine to be moved by gravity. “The library is now where my father used to park the tractor,” says Luisa Rocca. 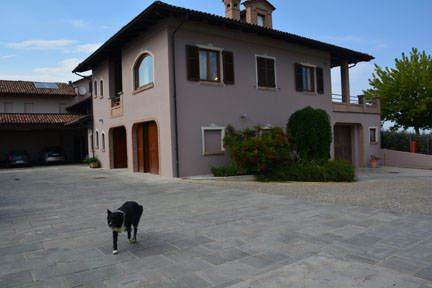 The family dog was defending the Rocca winery when I arrived

The land here was bought in the fifties by Francesco Rocca. “The grapes were already known to be good, but 1 km at that time was a long way from the center. “Grandfather used to sell the grapes in Alba every year, and the first and easiest grapes to sell were always those from Rabajà,” says Luisa. The winery started in 1978 when Francesco’s son Bruno started estate bottling. His children, Francesco and Luisa are now involved, Francesco with winemaking and Luisa with marketing.

This is very much a family affair—”there is no consultant, the wines are made by Bruno and Francesco,” says Luisa. The wines include, Barbera d’Asti, Barbera d’Alba, Chardonnay, Nebbiolo d’Alba, and several Barbarescos. The general Barbaresco blend comes from young vines (although not the youngest, from three vineyards in the Neive area). Coparosa comes from two vineyards (one in Neive and one in Treiso), but 2013 is the last vintage because the lease on one of the vintages expired. Maria Adelaide is a selection from several vineyards. Rabajà is the leading single vineyard wine. The Currà Riserva will be added with the 2012 vintage. “This is important because it’s different from Rabajà, which is powerful and rich, but Currà is elegant and feminine. It’s the first Riserva we will make and it’s Francesco’s project so it symbolizes the passing of the generations,” says Luisa.

Winemaking is very particular here, focused on a natural approach to highlight elegance. Fermentation uses yeast which were isolated from the Rabajà vineyard in a four year project. The grapes are broken very gently by using vibration in an interesting looking machine that also selects the berries. “I don’t want to crush the bunches, I would rather do more pump-over than crush, says Francesco. Carbon dioxide is used during sorting and crushing to minimize the need for SO2. “We use very gentle fermentation (in a mix of conventional vats and some rotary fermenters),  I’m looking for elegance and balance not power.” Barbera is matured entirely in barriques, the Barbarescos also in barriques, Rabajà spends one year in barrique and one year in cask, and the Currà Riserva spends three years in large casks,” because the barriques made it too fat, we were looking for elegance.” The minimum age for the oak is 14 years—”We prefer wood that doesn’t add anything to the wine. You need old wood with not too much toast.”

The Roccas do not consider themselves modern. “I consider modernists are people who make wine in the laboratory,” says Luisa, “traditionalists are people who make wine in the vineyard.” Yet the wines are very approachable. Bruno is not patient, say Francesco and Luisa, he has always made wines more on the approachable side. “We don’t believe that lots of tannins necessarily mean the wine will age well. When you use more extraction you have a wine that is more powerful and richer, but not elegant.” Bruno describes his approach as, “Our philosophy has become much more focused on the terroir. In the past we couldn’t do this because of the limitations of the winery. Now that the next generation are interested, we can make more investments, and we plan to move to 100% single vineyards.” The style here is very fine, from the lightest Barbaresco to the weighty Rabajà, there’s a sense of extremely finely textured tannins, silky, but always ending in an impression of finesse.

2 thoughts on “A Visit with the Rocca Family in Barbaresco”