The death of cuisine in France has been greatly exaggerated. Perhaps nowhere but France could there be a tiny village with two restaurants as innovative as those in Saint Amour Bellevue, in deepest Beaujolais.

Established by chef Cyril Laugier and his wife Valérie in 1996, Auberge du Paradis in Saint Amour has been my watering hole in the Beaujolais for several years. The hotel has a great atmosphere; Cyril and Valérie are what the French would call très sympa. A boutique hotel, the building gives the impression of having been constructed over time from several different buildings, so there all sorts of unexpected turns as you find your way to your room. Decoration is very stylish, if somewhat idiosyncratic; I suppose I would describe it as French/Italian modern. Breakfasts give the most fantastic send-off before spending a day tasting: I use the plural because they are different every day—even the jams, uniquely spiced, are different every morning. Cyril serves the breakfast himself.

The restaurant obtained a much deserved Michelin star in 2014. The current menu starts with a sorbet of aubergine, with a curry vinegar, and basil herbs. The subtle Asiatic influences made this the killer dish for me. It was followed by tuna, marinated with herbs, confit peppers, and Kashmiri influences. Then there was pork that had been marinated in soy, before being cooked in the oven, together with a spaghetti of cucumber. The desert was equally innovative, raspberries with cream of roses. Overall, the style of cuisine seems to have become more forceful over the years I have been coming here. 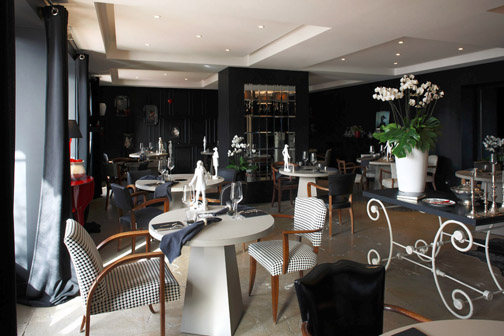 The restaurant at Auberge du Paradis was redecorated in 2014 and is elegant and spacious.

Within a hundred yards across the street is a more recent arrival, 14 Fevrier (named for Valentine’s day) by Japanese chef Masafumi Hamano, who came to France in 2004 after working at a French restaurant in Tokyo. He started the restaurant in 2013 and obtained a star from Michelin immediately. The elegant restaurant shows a Japanese aesthetic and the cuisine is modern French with a Japanese twist. Amuse bouches included a hibiscus macaroon, a verbena macaroon, and vichyssoise with a watermelon sorbet. The first course was described as a pana cotta, but at first sight had nothing to do with it. It turned out the pana cotta was underneath a gelée of turnips. The surprise combination of flavors made this the killer dish for me. The next course was cobia (a meaty white fish) in a lobster sauce. The combinations of unexpected flavors can be a bit tricky to match with wine, but all worked brilliantly. 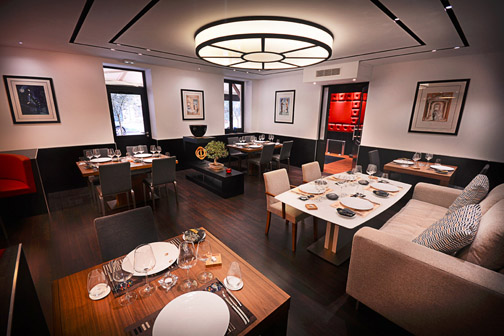 14 Fevrier is stylish and spacious with a Japanese aesthetic.

A feature of these restaurants, as well as many others visited on this trip, has been the treatment of vegetables. I remember that when l’Arpège, the three star in Paris, changed to a vegetarian menu some years ago, it was regarded with a certain degree of suspicion. But now treating vegetables as an important component in their own right, not merely an accompaniment, has become common. I might go so far as to say that this month in France has been an education in vegetables, coming both from the exceptional quality of the produce to innovative treatments.

Being in Beaujolais, both restaurants have excellent wine lists with many reasonable choices. At Auberge du Paradis, we had a top Pouilly Fuissé, the 2009 Instarts from Château Beauregard. The richness of the year is beginning to overtake Beauregard’s classic style, but the wine is at its peak now. At 14 Fevrier, we tried a white Nuits St. Georges, les Terres Blanches from Daniel Rion, also 2009, which was interesting as we had tasted the range of reds at the domain a couple of days earlier; it showed the same sense of textured power.

Both restaurants essentially have a single menu, which changes periodically. (At 14 Fevrier there is an alternative choice for the fish course.) I do not know what criteria Michelin has for awarding stars—I am not sure that anyone knows, including the Michelin inspectors—but both restaurants have one star. The food at both shows a level of innovation and complexity that would suggests two star, so I suspect the holdback is the fact that each presents only a single menu, with little or no choice. But Saint Amour is the place to go in the Beaujolais.