Bibi Graetz has a penchant for making wine in unusual places—high up in the hills of Fiesole, overlooking Florence, and on Giglio, a steep and rocky island off the coast of Maremma. Well outside the famous areas, the winery in Fiesole is there because “I was born here. My grandfather bought the house and land, did some farming and made some wine that was sold in bulk. My father planted a 2 ha vineyard here in the 1960s, after talking to the local farmers.” Bibi started making wine in 2000, but “when I started it was not a business, it was all very casual. I remember people coming to the house to buy wine in demi-johns. I threw myself into winemaking and since then it has been my life.” 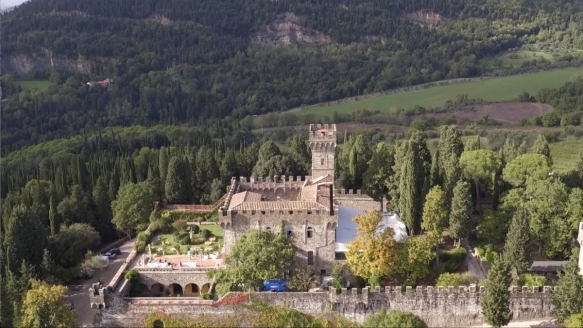 The medieval castle of Vinciaglata is at a high point overlooking the vineyards. Now empty, it would make a splendid winery.

Right from the beginning there have been two wines, Testamatta and Colore, both labeled as super-Tuscans. The approach is the antithesis of the increasing worldwide focus on single vineyards; both wines are blends from multiple sources. “I was in love with old vineyards, so it didn’t make any sense to buy land and plant—I planted my first vineyard only in 2012—so I looked for old vineyards. I still don’t own vineyards, but I have long term contracts; we manage the vineyards but don’t own land. So it doesn’t make sense for us to make a single vineyard wine. Our idea is more like a super-Tuscan than a Burgundy concept.”

We tasted barrel samples of the individual vineyards from 2016. “We are going to taste the vineyards from north to south,” Bibi said. As he described the sources, it became clear that Bibi is in love not only with old vineyards, but also with vineyards at high altitudes. All except one of the vineyards are above 300m. You might say his wines are all high altitude wines. And not only was there a wide spectrum from the different vineyards, from the cool climate impressions of a plot at high elevation above Greve in Chianti, to the more powerfully structured expression of a south-facing vineyard south of Siena, but there was a remarkable difference between barrels of different ages, even though there is no new oak in Testamatta. In the early years, the wines went into 100% new oak, under the advice of an oenologist, but this changed after 2005. “I don’t work with an oenologist any more because I like to do my thing. I worked with an oenologist at first, but they didn’t like my experiments.” Today Bibi’s view is that, “for Testamatta it is important not to use new oak, we wouldn’t have the fruit coming forward. The uniqueness of Testamatta is that we don’t impose a style, you don’t have the oak, you just have the impression of the grapes coming out.” Indeed there is wide vintage variation: 2016 will be a powerful vintage, but 2015 is infinitely elegant. 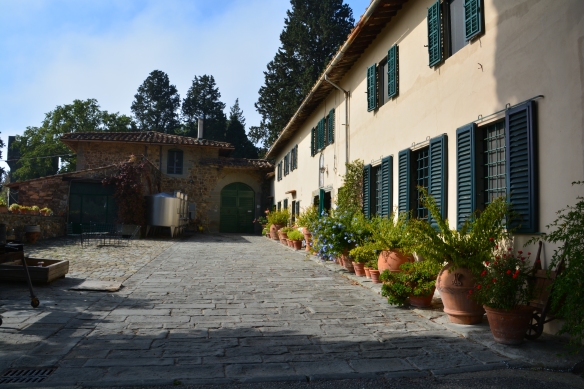 The family house and small winery buildings are grouped around a courtyatrd, right on the road through Vincigliata.

Testamatta comes from seven plots and is 100% Sangiovese. Colore is a selection of the best lots, from the oldest vineyards, and is about a third each of Canaiolo, Colorino, and Sangiovese. The vineyard plots used for Testamatta are more or less the same each year; there is a little variation in the Sangiovese used for Colore as it always has the best barrels. “Colore has a little new oak, we look for the lots with more structure, so it has a bit more volume.”

Bibi also makes the white wines on the island of Giglio, just off the coast of Maremma. “It’s basically a rock in the middle of the sea, it’s a pretty arid climate—it never rains!” Bibi says, with perhaps a slight exaggeration. “Vineyards go from sea level to 300m. We are planting one at 550m. You can do a big white wine in Giglio, it’s not so easy to find a big white from Tuscany.”

White wine has always been a bit of a problem in Italy, in my view. The paucity of interesting white wines has led me to start meals in Italy by choosing a red wine, irrespective of what food we might choose. There’s a handful of exceptions, starting Valentini’s Trebbiano d’Abruzzi, which I love for its savory character, and there are some Chardonnay’s from the north following a more Burgundian model, but it’s hard to argue with the view that white wine is much more difficult than red.

Bibi’s whites have their own character. There is a strong emphasis on Ansonica. Scopeto (named for an area of Giglio) is the entry level, and is a blend of Vermentino and Ansonica. It has 20% fermented with skins for one week “in the old way” and has a slight impression of an orange wine. The other whites are all 100%. Ansonica. Chiozzolo really is an orange wine, fermented on skins for 7 days and aged in new barrels that come from Burgundy. Bugia is more conventional, aged 90% in stainless steel and 10% in wood. Last year Bibi produced a white Testamatta for the first time, just 700 bottles. “For Testamatta I took the best parcels, there’s no skin contact but it’s fermented and aged in 100% new oak. Here I think you go towards a big white wine.” The common feature, whether it comes from the grapes or from skin contact or oak maturation, is a sense of extract and texture to the palate, almost a sense of austerity to restrain the fruits. Powerful would be a misleading description, but these are definitely wines with a strong personality. In the white Testamatta 2016, the oak is already beautifully integrated and is (as it should be) a subtle presence in the background. I suspect it will prove to be just as successful as its famous red brother.

Making wines in three places,Bibi is a busy fellow. White wines are made on Giglio, Testamatta and Colore at the small winery in Fiesole, and the entry level wines, which are part of a negociant activity, under the Casamatta name, are made in rented space at a larger winery. “Our winery is not big enough to do entry level wine,” Bibi explains. It has been difficult to visit or purchase wine at the winery, because it’s basically a small group of buildings extending from the family house. But this may change as Bibi is thinking about moving into larger space, which would relieve the cramped conditions at the winery, and allow there to be a tasting room. Spending a morning with Bibi, I got the impression that it’s not just wine that ferments here: there is a constant ferment of ideas. In the air at the moment are the possibilities of introducing a single vineyard wine or a second wine to Testamatta. This must surely be one of the liveliest wineries in Tuscany.