“In the eighties there were two big schools, cuve and oak; my father was always stainless steel; he used to say, I’m not in the timber business. But he has changed his mind,” says Fabien Moreau at Christian Moreau. “William Fèvre always used some new oak, but that stopped as soon as Henriot took over in 1998. We didn’t want to boisé the vin, to the contrary we wanted to keep freshness,” says Didier Seguier, who came to Fèvre from Bouchard at the time. Here you see the convergence in Chablis: protagonists for stainless steel have taken up oak, while protagonists for oak have backed off.

The two extremes remain Raveneau and Dauvissat on one hand, where everything is matured in barrique, and Louis Michel at the other, where everything is matured in stainless steel, but at most producers Petit Chablis and Chablis are matured in cuve, and varying proportions of oak are used for premier and grand crus. The approach is Burgundian in the sense that the oak exposure is graduated with the cuvée. On the Côte d’Or, of course, all the wines are matured in oak, and the tendency is to increase the proportion of new oak going from communal wine to premier cru to grand cru. In Chablis, all the oak is old and it’s the proportion of oak to stainless steel that changes.

Almost every producer was at pains to say that there is little or no new oak. The duration is usually quite limited: one common approach is to put a proportion into oak, but after around six months to perform assemblage with the wine matured in cuve. After assemblage, the wine is matured further, but exclusively in cuve. So why do I often find obvious oak on Grand Cru Chablis, and sometimes on premier cru also? In fact, it’s often necessary to wait a few years to let the oak integrate.

As a lighter wine than the Côte d’Or, even at Grand Cru level Chablis doesn’t have the same capacity to support oak or more extraction. Indeed, although maturation on the lees is common, typically for around 12 months for Premier Cru and around 18 months for Grand Cru, battonage is unusual in Chablis. “We don’t have the same body and strength as the Cote de Beaune, if we go too far with battonage the wine will be good at first but will tire quickly,” says Sandrine Audegond at Domaine Laroche. I wonder whether the difference is battonage is a contributing factor to the occurrence of premature oxidation on the Côte d’Or and its absence in Chablis

Each producer has his own view on how best to express terroir differences in Chablis.Is this done by vinifying all wines in the same way, so that the only significant difference is the terroir. This is the view of both Dauvissat and Raveneau (with only oak) and Louis Michel (with only steel), and Jean-Claude Bessin (all premier and grand crus with 60% oak). Or should vinification be adjusted to the Cru, as it is at William Fèvre, Droin, Laroche, Long-Depaquit, and Christian Moreau, with a general policy of increasing oak proportion going up a hierarchy of premier and grand crus. Somewhere in between are Pinson and the Chablisienne cooperative, where all premier crus get the same treatment, but grand cru gets more oak.

After years of drinking Chablis, I have a pretty clear view of the characters of the premier and grand crus. Montmains and Vaillons are the best premier crus on the left bank, with similar exposures on parallel hillsides in adjacent valleys. Close to the grand crus on the right bank, Fourchaume, Mont de Milieu, and Montée de Tonnerre have more structure and richness, and among the grand crus Preuses is always the most delicate and feminine, while Les Clos is always the most reserved, even austere, and needs longer.

But the grand crus extend all the way from the road just on the edge of the town to the woods at the top of the hill. With the much slighter slope along the Côte de Nuits, for example, everything depends on position on the slope: so especially for Les Clos, the largest grand cru in Chablis, how come it is always the most powerful wine made by any producer, irrespective of whether the plot is in a protected position under the trees at the top or exposed in the middle or at the bottom? Even within the smaller crus, there can be significant differences in soil types, so is any fixed view of their character more imagination than reality?

All across the northern limits for winemaking in France, from the Loire in the west, across Chablis, to Champagne and Alsace in the east, wine styles continue to evolve in response to global warming and better methods of viticulture that increase maturity in the grapes. In the Loire Chenin Blanc no longer tastes of wet dog, but now shows an almost waxy, almost nutty, spectrum of stone fruits: Sauvignon Blanc is rarely herbaceous and may go so far as to show apricots. Over in Alsace, there’s a trend towards wines with more residual sugar, while in Champagne dosage has decreased to keep the balance. In Chablis this week I was struck by the sheer fruitiness of many wines: fruitiness is not a quality I would have associated with Chablis twenty or thirty years ago.

When I asked producers how they see Chablis today, the answers were pretty uniform: it should retain freshness and minerality. When I followed up by asking how its character has changed, the answer was generally dismissive: it hasn’t really changed at all, they would say. Global warming has been beneficial; chaptalization has become rare, difficult vintages have turned out much better than they used to, but that essential tension between fruit and acidity, perhaps what the French call nervosité, hasn’t changed at all. I don’t agree on this last, crucial point about character.

I remember when most Chablis was thin and acid, where the fruits (if you could detect them) were bitter lemon or grapefruit. Granted that citrus remains the dominant flavor in the Chablis spectrum, often enough today it moves from fresh citrus to stewed fruits, rounder and softer, and often enough there are notes of stone fruits running in the direction of apricots. Minerality is hard to describe, but like pornography you know it when you taste it, and it’s fair in my opinion to say that in many cases it has now become subservient to the fruits.

When I visited Verget last year, I had an interesting discussion with Jean-Marie Guffens about his entry into Chablis as a negociant. “They were all so bad in Chablis twenty years ago. For me, concentration is important, lower yields and riper. But everyone said, we are making Chablis, it’s never ripe, the typical Chablis is green. People said, when you make ripe Chablis, it loses its character. But you can’t make wine from unripe grapes – all green wines taste the same. Today I count about twenty people making good wine, twenty years ago there were almost none,” is his position. In conventional terms, Verget’s wines have often struck me as a half way house between traditional Chablis and the Côte d’Or, although I’m sure Jean-Marie’s view would be that “traditional” Chablis simply shows the accumulated history of failure in the region and is a misleading expression of its terroir.

Well, anyway, the typical Chablis isn’t green any more. Back in the eighties, the issue of steel versus oak was quite controversial in Chablis, but now most producers have settled into a compromise in which the top wines are matured partly in steel and partly in (old) barriques. The extremes of all oak and all stainless were defined by the principal protagonists many years ago, but others have been adjusting the balance of stainless and oak to get their desired style, and it’s here that I see the most change. Steel producers now use some oak; oak producers have backed off on the proportion. At one time, William Fevre was using quite a bit of new oak, but that stopped when Henriot took over in 1998. You don’t often get the chance to compare the two styles directly, and the closest I came was at Billaud-Simon, where the Mont de Milieu is vinified in stainless steel but the Vieilles Vignes from one parcel sees some oak. The stainless Mont de Milieu was to my mind closest to the aspirations for minerality, but the Vieilles Vignes had rounder, softer fruits with more immediate appeal. I have the impression that Bernard Billaud’s heart is in stainless steel, but the introduction of some cuvées using oak is a concession to the market.

The most overtly fruity style comes from Long-Depaquit, owned by negociant Albert Bichot. “The styles are really different here,” says régisseur Matthieu Mangenot. The common features are freshness and minerality. But Bichot’s style is to produce wine with fruity character. We don’t want to say to our premier cru customers, buy the wine and wait ten years, the objective is to bring emotion to the wine even when young.”

As a rough measure, it seems to me that it might be possibly to classify producers on savory/fruity balance. The most savory would be Raveneau and Dauvissat, both comitted to oak, and perhaps for that reason my favorites. But there is no exact correlation between use of oak and tendency to savory. My order of producers by style would go like this: 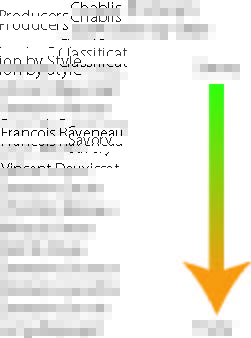 The balance changes with every cuvee and vintage, of course, but perhaps this is a useful guide to thinking about how producers fit into changing styles. The differences are not as violent as the arguments in some other locations between modernists and traditionalists, but the fruity style may be more modern, at least in the sense that wines like this would have been difficult or impossible to produce until recent times.