Jean-Pierre Moueix established Pomerol on the map almost single-handedly after the second world war. Having become the aristocrat of Pomerol, today Moueix is turning somewhat away from the negociant business, has sold off some of the minor chateaus in its holdings, and is focusing more clearly on a group of 9 top chateaus, mostly in Pomerol. Virtually adjacent to Pétrus, Vieux Chateau Certan is owned by 44 members of the Thienpont family. Thienponts seem to be all over Pomerol and St. Emilion, from Jacques at Le Pin to Nicolas and his son Cyrille who manage a group of chateaux in St. Emilion.

Tuesday: the peak of Pomerol. No visit to Pomerol would be compete without seeing Pétrus, of course, where the former shabby buildings have been replaced by a spanking new facility. Ironically, because Pétrus was in the forefront of the movement to green harvesting, and Christian Moueix was supposedly rebuked in the local church for wasting God’s bounty, “we no longer do green harvest because we are not looking for concentration of sugar, we are looking for concentration of flavor… In spite of all our efforts, wines are over 14% alcohol. We are thinking of bring back Cabernet Franc.” 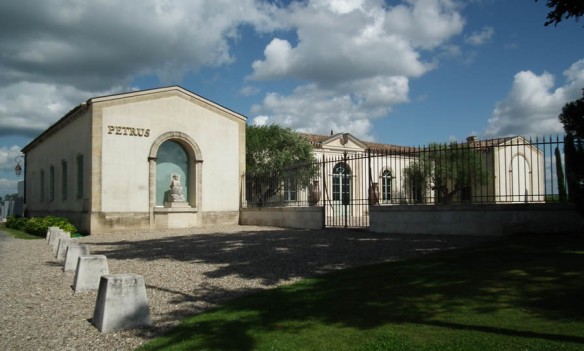 Pétrus is no longer shabby, in fact it is quite snazzy

Wednesday: variations in clay. With 9 chateaus, Moueix dominates the top end of wine in Pomerol. At the very peak are Chateau Hosanna (the most delicate in style) carved out from the breakup of Chateau Certan Guiraud, Fleur Pétrus (distinctly feminine and elegant), then a complete contrast with Trotanoy (the most masculine and weightiest), and of course Pétrus stands alone. It’s all determined by the type of clay. We met at Fleur Pétrus, which recently moved production from the old chateau just by Pétrus to a building opposite the church in Pomerol. It’s the only one of the Moueix properties a visitor has any hope of finding: the others are all extremely discreet, with no signposts.

I reproach export manager Frédéric Lospied for the disappearance of Chateau Magdelaine, a Moueix property in St. Emilion, which has always been one of my favorites for its discrete style. “Other people have been telling me that,” he says, but the explanation that combining it with Belair-Monange gives a more reliable, larger scale of production doesn’t really add up given Moueix holdings of tiny properties such as Hosanna and Fleur Pétrus.

We drive past Petit Village and I take a picture of the extraordinary new structure, a suspended box connecting two buildings, but we do not visit, because my last visit there, two years ago, was cancelled by owner AXA when they learned I wanted to discuss the strange case of the disappearing Cabernet Sauvignon. Petit Village was supposed to have one of the largest plantings of Cabernet Sauvignon on the right bank, but it turned out to be a mistake: it was really Cabernet Franc. In the context of my book, Claret & Cabs, I thought this block might be interesting, but AXA said sniffily, “we do not think it is constructive to talk about Cabernet Sauvignon at Petit Village.”

What are these vines? Chateau Petit Village is not receptive to discussing Cabernet Sauvignon and Cabernet Franc.

Friday: Thienpont Day. Managing nine chateaux in St. Emilion and on the Cotes, Nicolas Thienpont is a busy fellow. Over lunch with Nicolas, his son Cyrille, and vineyard manager David Suire, I gingerly broach the controversial subject of the recent reclassification in St. Emilion. “There are things you can say, and things you can’t say,” says Nicolas, “which do you want to hear?”. Obviously I want to hear what can’t be said. Nicolas is evidently happy with the recognition of his work with the promotions of chateaux he manages, but says flatly that he’s not really satisfied with the basis for classification. This is a common theme, even among chateau owners who are classified in Premier Grand cru Classé A. The heart of the matter is how much the classification should depend on the quality of the terroir and the wine, and how much on other factors. If there’s any common view, it’s that terroir and quality should count for much more than the present half. Will things change for the next classification, I ask. Nicolas shrugs. “You’ll have to ask INAO,” he says, “it’s all up to them.”

After meeting at Chateau Pavie Macquin in the morning, we had made a tour with David of the properties in St. Emilion: Beauséjour Duffau Lagarrosse, Larcis-Ducasse, Berliquet, and back to Pavie Macquin for a tasting. The approach in the vineyards and vinification isn’t terribly different among the chateaux, and Stéphane Derenoncourt is the consulting oenologist for the group, but a tasting of the 2011 vintage shows the distinctive character of each of the chateaus. Larcis Ducasse is a little reserved, but you can see the increase in smoothness from the past, and why it was promoted to Premier Grand Cru Classé. It would be difficult to draw a line in terms of quality between Pavie Macquin (promoted to Premier Grand Cru Classé in 2006) and Beauséjour-Duffau (a Premier Grand Cru since the initial classification in 1955), but Pavie Macquin has the edge for overt elegance—“it plays between the power of clay and the minerality of calcareous terroir” says Cyrille Thienpont–whereas Beauséjour is more structured. The ringer is Château Berliquet: with vineyards just above Angelus and below Beauséjour and Canon, it occupies prime terroir but has never risen above Grand Cru Classé. I ask Cyrille why this is, but the answer is enigmatic. I remember that under Nicolas Thienpont’s management both Larcis Ducasse and Pavie Macquin have been promoted in prior classifications.

Final visit of the week is off to something completely different, to see Stéphane Derenoncourt in the Cotes de Castillon, just to the east of St Emilion. Stéphane is a consulting oenologist with many chateaus in St. Emilion, and also started his own vineyard, Domaine de l’A in the Cotes de Castillon. Headquarters is a small modern building in the hamlet of Fillot, where everything seems to run on espresso. Stéphane is an enthusiast for Castillon. “Effectively Castillon is an extension of the limestone plateau. The different (with St Emilion) for me is the price.” We agree that in blind tastings the best wines from Castillon would be hard to distinguish blind from St Emilion, “not from the very best Premier Grand Cru Classés, which are truly exceptional, but from the others,” is Stéphane’s caveat. He’s disappointed, even angry about, the recent turn of events in Bordeaux. “we have a big problem here with the arrogance of Bordeaux and the enormous increase in price. People think that the Bordelais are arrogant, that they are only businessmen. It is a feature of the Grand Cru Classé, but it reflects on all Bordeaux. I think Bordeaux has the best price:quality ratio in the world, but people don’t recognize this.”