Any visit to Domaine Laroche that starts by seeking guidance from your GPS is doomed to failure: you go round and round a square with no apparent way out that will lead to Laroche. In fact, Laroche headquarters are in an old monastery built between the ninth and thirteenth centuries to which access requires driving through an archway that doesn’t seem wide enough for the car. The best way to get there is actually to park at the Laroche boutique in town, and then someone will show the way though a couple of narrow passage ways to the winery. 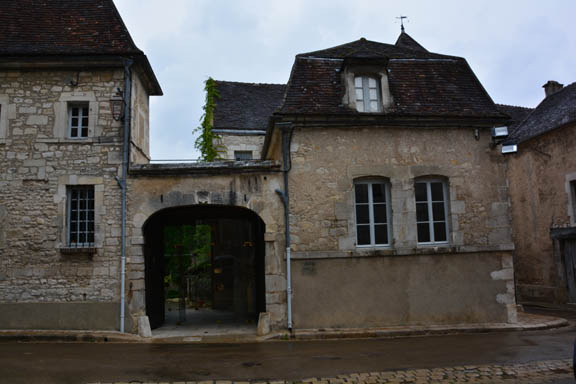 With 90 ha, Laroche is one of the largest producers in Chablis. There are 60 ha Chablis, 25 ha premier crus, and three grand crus. The Chablis St. Martin under Domaine Laroche comes from their own 60 ha and is a selection of the best lots. It’s about 70% of total. The other 30% is blended with purchased grapes and named just as Laroche (because it’s not just the domaine) and called only Chablis. You have to look carefully at the labels to distinguish.

The Chablis is all stainless steel with no battonage; premier and grand crus come from assemblage of lots matured in cuve with lots matured in barrique. There’s steady graduation of intensity and power going up the hierarchy. The top wine is the Réserve de l’Obédience, which is based on blind tasting to blend the best lots of Blanchots. My experience in the past has been that this carries a lot more oak than Blanchots or the other premier crus, but sales manager Sandrine Audegond says this it varies according to the vintage. “In the last five years, the oak level has varied from 30 % to 100 % (majority of used oak, however), as a result of the blind tasting.”

I ask whether the style of Chablis in general and Laroche in particular has changed with global warming? “No, not really, if there’s been any change it’s due more to viticulture. If the grapes are ripe, if you have thick skins, you will always have minerality. In Chablis, to be absolutely frank, we have an awful climate, summer can be quite unsettled. The blessing of the place is that we have a long dry period in September,” says Sandrine.

What about Laroche’s much vaunted move to bottling under screwcap? “Michel Laroche was dark red when he saw cork manufacturers because he was fed up with quality,” Sandrine explains. Petit Chablis and Chablis are now under screwcap; premier and grand cru are done under either screwcap or cork, and the buyer can choose. What difference do you see in the development of the wines, I ask. “If you want to keep freshness, keep the screwcap, but you will lose some complexity. If you want to develop very complex character, stay with cork.”