I wound up my week in Beaujolais by visiting two long-time producers, whose approach to making Beaujolais could not be more different, but each of whom typifies the very best of their approach.

I remember Château des Jacques when it was owned by Thorin and produced a single Moulin à Vent, usually (in my view) the best wine in the appellation. (There was also sometimes a vieilles vignes cuvée coming mostly from the lieu-dit of Rochegrès). Thorin were famous for adopting a completely different policy from the semi-carbonic maceration that dominated (and still dominates) Beaujolais. Wines were treated in a Burgundian way and aged in oak barriques, something that was regarded with horror by other winemakers in the region.

Purchased by Jadot in 1996, Château des Jacques has been considerably expanded over the past two decades, from 43 ha solely in Moulin à Vent to more than 80 ha, mostly in Moulin à Vent, Morgon, and Fleurie, but including 9 ha that are used to make a Beaujolais Blanc. Winemaking policy remains unchanged: “Our philosophy is to produce Gamay that is able to age and reflects its terroir, we really want to show that Gamay is like Pinot Noir in reflecting terroir,” says winemaker Cyril Chirouze. “So we make wine like Burgundy, everything is destemmed. Many people equate Beaujolais with carbonic maceration [which requires whole bunches] but in fact carbonic maceration started to be used only in the fifties, we consider that the real tradition is to make wine like Burgundy.” 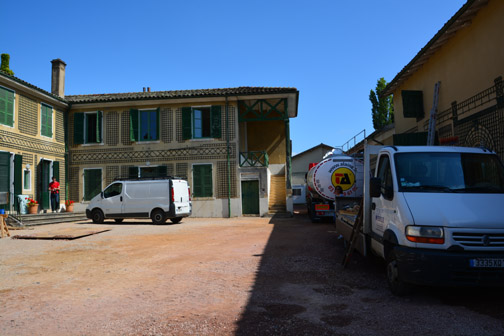 Château des Jacques is a building site today because the old winery is being completely renovated.

A new cuverie is being constructed and should be ready for the 2017 harvest.

Tasting the range is much like a tasting in Burgundy. The communal blends are textbook illustrations of their appellations; Morgon is the tightest, Fleurie moves towards fleshiness, and Moulin à Vent shows breadth and that sense of minerality (I call it iron in the soil although if there’s any mineral in Moulin à Vent it’s really manganese). In the lieu-dits of Moulin à Vent, Carquelin (with some clay in the soil) is a little rounder than La Roche (which is sandier), and Rochegrès has a sense of purity and minerality enhanced by its high elevation. Moving to Morgon Côte du Py (at the same elevation of 360m as Rochegrès), there’s that typical sense of tension. All of the wines require aging: I tasted a horizontal of the 2014 vintage and I would wait at least 2-3 years before starting any of them. We concluded the tasting with a 1996 (to celebrate the anniversary of Jadot’s purchase) and it still in excellent shape.

My next visit was to Domaine Paul Janin (also known as Domaine de Tremblay) where “the history is very simple,” says Eric Janin. “It goes back to my great grandfather, who was a tonnelier and bought several parcels of vines.” My grandfather bought some vines in the Tremblay lieu dit, which became the official name of the domain. “The domain has both increased and diminished since then.” Today there are 7.5 ha, all in Moulin à Vent, except for a hectare of Beaujolais Villages. There are three cuvées from Moulin à Vent: Vignes de Tremblay, which is a blend from several plots; Heritage, which is an assemblage from plots planted by Eric’s grandfather in the 1930s; and Le Greneriers, which a single vineyard wine from around the house. Vinification follows what you might call recent tradition, with whole bunches going into the vat with only a little destemming, giving carbonic maceration for the first few days, followed by maturation exclusively in stainless steel.

The Janin domain is in the heart of Moulin à Vent, a stone’s throw from Château des Jacques.

The wines are the quintessence of maturation in cuve, emphasizing purity of black fruits, with cherries merging into more aromatic notes in warmer vintages. Tannins can be felt on the finish but are very supple. There is greater concentration going from the Vignes de Tremblay to the Vieilles Vignes and then to the single vineyard wine, but there is always that sense of finesse and focus. The 2014 vintage is wonderfully approachable already. The same sense of purity and precision carries over to the Beaujolais Blanc.

There is something for everyone here. I wouldn’t like to argue as to whether there is a “true” style for Beaujolais, but it’s obvious from comparing the two producers that you can make top notch wines in more than one way. All serious producers in Beaujolais feel they are laboring under the burden that it’s difficult to get away from the image of Beaujolais Nouveau—which is why the Crus rarely put Beaujolais on the label—but it’s worth recognizing that the Crus, especially the top ones of Fleurie, Morgon, and Moulin à Vent, can be interesting, and reflective of terroir and Gamay, just as much as better known varieties.