Quinta da Noval has always been an icon for me because of the Nacional vineyard, a tiny plot of 1.7 ha just below the winery, where the vines are all planted on their own roots. Apparently it was treated heavily against phylloxera, but as the present vineyard was planted in 1924, it’s not obvious why it wasn’t planted on rootstocks. Unfortunately I’ve never had the 1931, which some people consider the best Port of the twentieth century, but I was able to visit the vineyard and taste the latest vintage. It has a large number of different varieties, all mixed together, which is common in old vineyards in the Douro, and as vines die they are replaced by another of the same variety. It’s a mystery how the vines are able to survive on their own roots when all around it is necessary to graft to avoid being consumed by phylloxera. 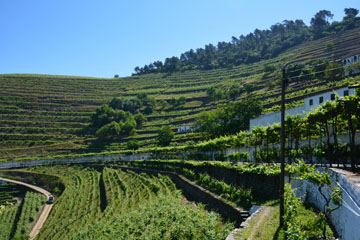 Quinta da Noval is a lovely property high up above Pinhao, with about 145 ha of terraced vineyards. The Port is made in modernized lagares, modernized in the sense that they have heat exchangers to control temperature, but traditional in the sense that the grapes are still trodden by foot for the first three days, as winemaker António Agrellos considers this produces the best results. After that, a robot takes over. Since 2000, Noval has produced red table wine as well as Port. “When we took over, the vines were not in very good condition, and with 60-70 ha we didn’t have enough grapes to make table wine as well as Port, but we have planted and now we have enough,” António says. “We’ve tried foreign varieties, Cabernet Sauvignon doesn’t work but Syrah is good, but mostly the wine comes from indigenous varieties.” 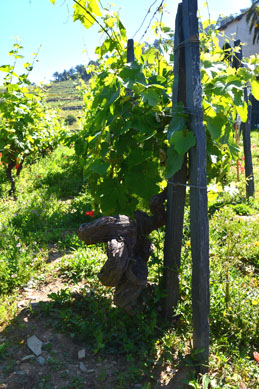 An old vine in the Nacional vineyard

We tasted the range of red wines and Ports. Here are some highlights.

This is a pure Syrah. “This is not an authorized variety, but many people plant it and we’d like it to be authorized for the Douro,” says António. Aromatics and palate somewhat reminiscent of Northern Rhone, smooth somewhat along lines of Cote Rotie, just a faint touch of pepper on the finish. Still rather young, needs time.

This shows just a touch more complexity on the nose than the 20-year tawny Port, with the fruits cut by a vaguely herbal impression. Sweetness is subsumed by flavor variety and seems more subtle. Lovely combination of iron structure and elegant fruits, with lots of character.

“Our aim is to make a vintage Port every year,” says António. There wasn’t one in 2010, but since then there has been one for three years running. For me, the most recent, the 2013, is the most approachable at present. Restrained nose shows aromatic black fruits just poking out. Already wonderfully smooth with layers of flavor developing. A little spicy, a touch nutty, but not too spirity. Promises to become extremely elegant.

Silky smooth over and above the 2011 Noval. Layers and layers of structure underneath an elegant sheen of the fruits, iron fist in the velvet glove; concentration of old vines shows through, but without heaviness.Vinicide to drink now. 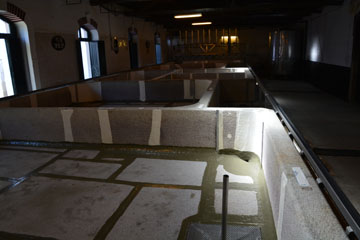