Valpolicella is an area of extremes. On the one hand, Valpolicella tout court is simple, light, and fruity. On the other hand, Amarone is a weighty wine, with lots of extraction coming from the use of dried grapes, definitely in the direction of power and opulence. Given this bifurcation, you might expect the emphasis in the region to be on methods of vinification, but on a recent visit I discovered that in fact a major concern is the abuse of terroir.

You might say the problem started years ago, when the area of Valpolicella was extended. The original area, close to Lake Garda, is now called Valpolicella Classico, and remains (or should remain) the mark of quality. The general Valpolicella area extends far to the east, past Verona, and to the north of Soave.

Three types of wine are made in the Valpolicella region. Lowest in the hierarchy is the regular wine labeled with the name of the DOC (Valpolicella Classico or Valpolicella). Superiore is supposed to indicate slightly higher quality. These are very much wines for quaffing, a bit like Beaujolais. Then there’s what you might call an intermediate style called Ripasso, which I will discuss in tomorrow’s blog (When Ripasso Is Not Ripasso).

At the top of the pyramid come Recioto (sweet) and Amarone (dry), which have their own DOCGs based on the method of production. In the Appassimento technique, grapes are dried for a minimum of 100 days on wooden trays in drying lofts before pressing and fermentation. This concentrates everything to make wine in a rich, oxidative style, but the style isn’t due just to greater concentration: a wide range of aromatic changes also occur during the drying period (and are emphasized further if any botrytis occurs, although it’s discouraged by many producers). The basic difference between the two styles is that Amarone is fermented dry, but fermentation is stopped for Recioto to leave some residual sugar (typically around 100 g/l). Sometimes the grapes are dried a month longer for Recioto.

It seems pretty obvious that if the basis for making the wine is concentrating the grapes before fermentation, those grapes are absolutely going to have to be of the highest quality. “You can’t just use any grapes for Appassimento. Large bunches don’t work well as they get too much rot. You need lighter bunches that are open and not too compact. Harvest occurs a few (5-6) days before what would be regarded as peak ripeness, to help to preserve acidity,” says Massimilla di Serego Alighieri at major producer Masi.

Until the early nineties, Amarone production was 1-2 million bottles, which is around 6% of all production in Valpolicella. But then it took off exponentially, and now is around 10 million bottles, accounting for more than a quarter of the grapes. What does this do for quality? According to Marilisa Allegrini, “Production has increased drastically, and the only way to do that was to expand. People started planting on the plain in the sixties, in areas that aren’t historic for producing Amarone, because of the demand. There is no regulation. The Consorzio [who make the rules in Italy] are dominated by companies that pay more contributions (because of higher volume) – in Valpolicella it’s the coop. The irony is that the people who make the rules today are the people who didn’t make any Amarone ten years ago. Now much of Amarone is produced in areas that never made it before.” 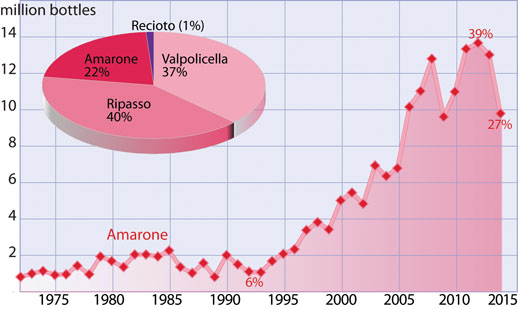 Single vineyard Amarone’s are relatively rare, so it’s difficult to get a direct feeling for the effect of terroir, but at Allegrini all grapes for Amarone come from hillside vineyards. In addition to the effects of increased elevation, the soil turns from clay to limestone. All this brings a certain precision, which in my opinion is needed to counterpoise the effects of the extra concentration from drying. It is awfully easy for the style of Amarone to slide into clumsiness. There’s not a trace of that at the top producers whom I visited, whose wines I’ll discuss in detail in a future blog (I Visit Four Top Producers in Valpolicella).

So what’s to be done? The Consorzio did take a step in the direction of quality by reducing the proportion of grapes that can be used for Amarone from the legal limit of 65% to a lower 50%, but the expansion of plantings has reversed the reduction in output. When Amarone (and Recioto) were promoted to DOCG in 2009, the rules specified the length of the period for drying, the proportion of grapes that could be used—but not which subregions within Valpolicella might be appropriate. It’s time to rectify this major mistake.