Until Patrick Piuze came along, it was hard to think of a negociant who made interesting Chablis. Some of the large firms from the Côte d’Or have taken positions here, the Chablisienne cooperative is a major player with about a quarter of all Chablis, but the running is mostly made by individual domains.

Patrick’s winery in the heart of Chablis is an old building bought from Vocoret, in fact it still says Vocoret on the side. Inside it’s larger than it appears at first sight from the cramped interior, as it’s connected by a tunnel under the road to caves on the other side. This was constructed in the period when a Vocoret was the mayor of Chablis, it probably wouldn’t be possible today, Patrick explains. 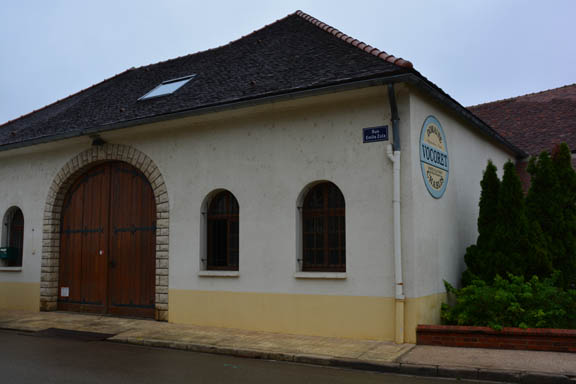 What is the driving force to be a negociant in Chablis? “I wasn’t born here, I came from Montreal. I ended up in 2000 in Burgundy at Olivier Leflaive and they asked me to look after the winery they were building in Chablis. I’m still here. Even if land is cheaper here, I had no money, the only way to make a lot of appellations is to be a negociant. The essence of the place depends on the mosaic of soils, when you realize this you want to make lots of cuvées not just one.” Production is  65% Petit Chablis or Chablis; 35% is premier and grand cru.

“We try to buy grapes we like from special sites, before we worry about having a specific appellation such as Blanchots etc. There are a few barrels of each wine – no single barrel wines.” That’s all very well, but I wondered how it’s possible to get grapes from top sites. “Well the structure of Chablis is different, there are many growers. The people we buy from may produce wine, but aren’t looking to distribute more bottles, it’s fast cash to sell the grapes. If a grower hasn’t created a brand, vinifying doesn’t have the same plus value. I want to be as close as possible to a domaine without having to purchase land.”

Patrick harvests the grapes with his own team. “Choosing harvest date is one of the most important things. And it‘s important to decide whether to pick in the early morning or afternoon, it depends on the conditions. We are an early picker. Harvest is typically 90 days after flowering. A wine can have only one backbone. 90% of white wines in the world have an alcohol backbone, but we have an acid backbone. Our wines are 12 or 12.1% alcohol, never more than 12.3%.”

Petit Chablis is matured in cuve, Chablis is a mixture of cuve and barriques,  premier and grand crus are entirely in barrique. Not only is the wood old, but it’s chosen specifically for its history. “We buy only old barrels, to add density not makeup. If you lose the minerality you might as well make Macon. We only buy barrels from high acid vintages, because the wine of the first year marks the barrel.”

The style here reminds me just a little of Verget, where Patrick worked for a period, in getting to full ripeness without excess, but it’s a bit tighter; there’s a sort of silky sheen to the fruits, a sense of stone fruits adding to the citrus and minerality of Chablis; yet always with that wonderfully moderate alcohol. I pushed Patrick on why he can get such a complete impression at alcohol levels a per cent below everyone else, but I couldn’t resolve the mystery.

We tasted a range from 2012 and 2011, and that sense of tension counterpoised against the elegant fruits runs through the whole range from premier crus to the more overtly full grand crus. Terroir comes right out: Preuses the most feminine as always, Bougros racy, and Valmur ripe. It’s easy to understand why the wines sell out within a couple of weeks of the vintage.