This is part 1 of the Chablis Diary. It continues with Raveneau, the savory/fruit index for producers, and terroir versus oak.

The first time I visited Vincent Dauvissat, a few years ago, I committed, well not exactly a faux pas, but perhaps a mis-step. Vincent had said that the duration of élevage in (old) oak barriques depended on the vintage, and I asked how he decided when the wine was ready to bottle. He looked at me, a little startled, and said simply, “The wine tells me,” but with an air of surprise at the naivety of the question. Over the years I have met many vignerons who practice what they describe as a minimalist approach, but few who in fact let the wine speak for itself so clearly.

Things have scarcely changed superficially since that visit. On one side of the courtyard is the house, on the other is the cellar. The house open; the cellar is locked. The children who played with the toys in the courtyard now help with the domain. The vineyards are the same; just over half are premier crus, there are Grand Crus and Chablis AOP, and a little Petit Chablis. Dauvissat has been biodynamic since 2002. I ask whether this extends to practicing by the phase of the moon. “Well, I’m a peasant, you have to be practical and efficient, so it depends on the weather.”

The courtyard at Dauvissat

The cellar is full of old barriques, with an average age of ten years. “The fact that the wine matures in a container that breathes brings out the terroir for me. New oak loses the subtlety of terroir, the delicacy on the finish, I don’t like that,” Vincent says. Élevage, exclusively in the old barriques, is in fact generally around a year. I ask whether there are differences in élevage between the various crus? “No, no, it’s the same work in the vineyards and the cave. The only difference in élevage is the Petit Chablis, which has only 9 months.” So the differences are due to terroir. 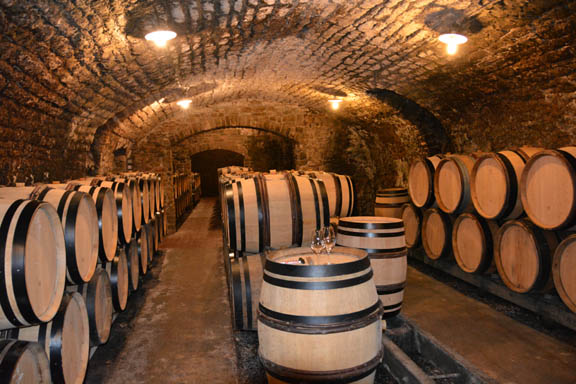 We tasted the range from the 2012 vintage. Petit Chablis has the most simplest fruits, Chablis begins to pick up in intensity, Sechets a little more, and the Vaillons really demonstrates the classic minerality. Coming to the grand crus, Preuses has more weight, and then Les Clos is as always the most austere, mineral, savory. Is Les Clos always the best, I ask. “Well each Cru has its style. Clos is always the most powerful, but Preuses has its own distinct aromatic spectrum,” is as far as Vincent will be drawn

We were discussing the aging potential of Les Clos, when Vincent says that of course it ages well, but the Petit Chablis also ages; the 2012 (which we had just tasted) will last fifteen years. He proved his point about aging by bringing out an old bottle to be tasted blind. Estimates of the year were just off, we thought it was 1995, but it turned out to be 1996. No one was able to pinpoint it as a Petit Chablis however: I would have thought of a Premier Cru. The impression was quite tertiary, with wide flavor variety; perhaps beginning to tire but still with some life. Certainly there seemed to be some convergence with premier or grand crus of this vintage, and I don’t know of any other producer whose Petit Chablis would last almost two decades.

To give Vincent the last word, “The wine speaks” is a perfect summary of Dauvissat.

1 thought on “Chablis Diary part 1: A visit to Vincent Dauvissat”