Very impressed with commitment to quality of three producers: Tirecul La Gravière, l’Ancienne Cure, and Vignoble Verdots. Vineyards for Bergerac form a big circle south of town of Bergerac: Bergerac can make red or (more recently) dry white. “We used Vin de Pays Perigord for white wine until recently, because there was no consensus among the producers what Bergerac Sec should be,” explains Bruno Bilancini at Tirecul la Gravière. Most producers have wines from all appellations, meaning Bergerac (red), Bergerac Sec (dry white), Bergerac Rosé and Moelleux (half sweet) and Monbazillac (botrytized sweet wine, which can come only from a small area in the center).

Tirecul la Gravière’s production is almost entirely Monbazillac, divided between Les Pins (young vines, which here means less than 25 years), the chateau wine, and Cuvée Madame, made only in exceptional years. The blend of grapes in the AOP is similar to Sauternes, but Bruno uses only Semillon and Muscadelle. “I’m not a fan of Sauvignon,” he says. With younger wines, the initial impression focus on marmalade; once again, I was put to shame by my companion, the Anima Figure, who could identify origins more precisely than I could, as bitter oranges of Seville. But she is an afficionado of English marmalade.

“With time the wine depends less and less on sugar and becomes more elegant,” Bruno says. With older wines, comparing the 2005 and 1994 Chateau wines, or the 2004 and 2001 Cuvée Madame, it seemed immediately obviously that in each case the older wine is less sweet and more complex: but being an oenologue Bruno has measured the sugar levels, which are in fact the same. The tasting completely refutes the idea that Monbazillac is a poor man’s Sauternes: it’s more savory than Sauternes, with herbal influences, which Bruno describes as saffron and anise, and I’d be inclined to describe as tarragon. At Ancienne Cure, the Monbazillac develops delicate notes of black truffles to counterpoise the sweet apricots. 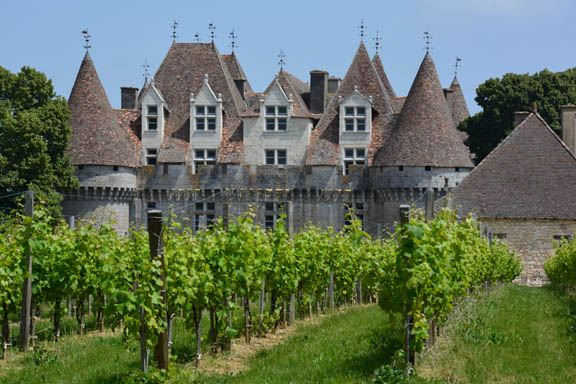 The Chateau de Monbazillac is now owned by the cooperative

Curiously the Bergerac Sec goes in the opposite direction. Again there is the same general mix of grape varieties as white Bordeaux: Sauvignon Blanc, Semillon, and Muscadelle vary in proportions (with a tendency to more Muscadelle in Bergerac), but the first impression of the wines is all stone fruits, peaches and apricots, sometimes quite perfumed, a real contrast with the grassier notes of Bordeaux. Then with time the wine turns in a more savory direction.

Terroirs differ to the extent that at l’Ancienne Cure—which takes its name from a thirteenth century church on the property—in Colombier, Christian Roche makes two thirds white wine, where across the road in Conne-de-Labarde, Vignobles de Verdot produces mostly red. At Vignobles de Verdot, I meet the whirlwind that is David Fourtout. We tour the chais to find all sorts of new equipment, from custom designed conical cuves to a special sorting machine. All this is intended to produce more precision in the fruits, with softer tannins: you might say the wine is becoming increasingly sophisticated. Both Christian and David produce a range of wines from entry level to top of the line, with the top reds labeled as Côtes de Bergerac.

Producers are conscious that Bergerac has an image problem. “We are not a famous appellation. Bergerac is close to Bordeaux is how we have to describe it,” says David. “This means we have to work harder in the vines.” The decision by the Syndicat to introduce a top level appellation called Côtes de Bergerac was a terrible mistake. Not the principle of higher quality, which is that chaptalization is forbidden, and longer aging is required, but the name: everywhere in France Côtes de Quelquechose indicates a wine that is inferior to Quelquechose. No one from outside could know that Côtes de Bergerac is intended to be a higher level than Bergerac “We are considering calling it Grand Cru instead,” David says, but it isn’t presently obvious that INAO will allow this.

The best wines in Côtes de Bergerac – which is only 4% of all red production – strike me as close in quality to the Côtes de Castillon, an outpost of Bordeaux just a bit to the west of Bergerac. Côtes is equally a problem there; the appellation should have been called just Castillon. I would say to INAO and the Syndicat in both cases: don’t undercut the efforts of the best producers, who are really committed to quality, by imposing a name that implies inferiority to consumers.

1 thought on “Southwest Diary part 1: Monbazillac, Bergerac, and a terrible mistake with the Côtes”